Update on the artifact.

Bad news everyone. Have not heard from the park yet as to the nature of the item I found. Maynor wins with the best guess: A tattooed bone. The best guess of the ranger that I turned the item over too is that it's part of a ladle or the foot of a pot. We shall see, I hope this funny video consoles you until I find out more about it.

put in the wild by Tyler Davis at 6:57 PM No comments:

Good news everyone, I'm an archeologist.  That's right. Now, you may be wondering how this happened.  If you really are, then by golly  you are in for a treat.  I will state before going to much further, I am an amateur archeologist.  Here is how it happened. While my wife and I were traveling to and fro between the cities of Salt Lake and Santa Fe, we made a detour for an amazing area of the world known as Mesa Verde. This national park is home to the ruins of a people now known as the Ancestral Pueblo. Or something to that effect.  Anthropologists don't call them Anasazi anymore, but that's what they used to be called.  Mesa Verde is amazing, the homes built by these people are on cliffs! Some barely have more then a foot of walking space along the cliff faces.  There are ruins of older buildings then the cliff dwellings on top of the mesas. One of them is called the Far View Compound.  It was here at the Coyote Village that I made my awesome discovery. 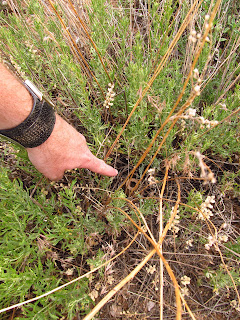 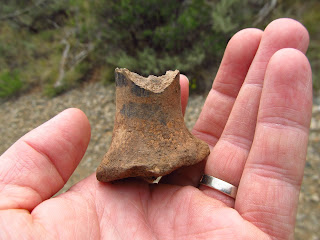 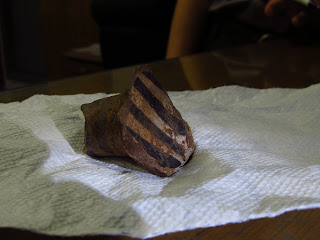 The first picture is how it looked when I saw it in the grass.  It looked like a bone or something strange, so of course I had to pick it up. Then I saw the glazes. You can see them in the middle picture and the bottom picture. It was so exciting to find something that was from somewhere in the neighborhood of 800 a.d.-ish. The people here lived there from 750 a.d. to around 1000 a.d. when they moved to the cliffs. After finding it, I didn't want to just set it down and walk away or take it home. It's national park property after all. So we went to the rangers station.  The ranger on duty told us after asking about finding pottery shards to leave it where we found it as the rain will unearth shards and other things. Then when I showed it to her, the eyes went wide and she got excited. Taking it from me she went and washed off the dirt reveling the black and white bands in the bottom photo.  I gave her my info and we will see what the real archeologists say it is.  Anyone have a guess? The ranger had some good guesses but I want to hear yours before telling you what she thought.  When or if I ever hear from the park, I will post the answer here.  As it stands, I found something really old and really cool.
put in the wild by Tyler Davis at 4:50 PM 4 comments:

What am I doing?